Local pop-punker Eli Frank is no stranger to the New Paltz do-it-yourself (DIY) scene. The New Paltz resident will release a new LP under the moniker TOP Nachos with friend Kenny Hauptman titled “Dank Side of the Moon,” which the duo will drop with an album release party at Snugs on Sept. 29.

The record kicks off with “VEGAN DOUGHNUTS,” a suitably fast and pop-punk-y track that sets the tone for the remainder of the album. The vibe of this track is consistent throughout the rest of the album, which is packed with millennial zeitgeist references. Some other prominent tracks are “SWIPE” and “PUNK VACATION,” which may be released as a single.

“They’re super upbeat, catchy party tunes, kinda like The Marked Men and Bad Religion at a high school soda party.” said Greg Hanson. Hanson is an executive at King Pizza Records, which the LP will be released on.

One standout track is “CANADA,” an anti-Trump pop punk banger. It’s undoubtedly a fun song, with lyrics like ‘I can’t stand to see that orange man / go f*** yourself with your tiny hands.’ However, the track centers around the idea of running away to Canada to escape tyranny by the U.S. government, which seems vaguely problematic despite the good intentions behind the track itself. Why run away from this problem rather than combat it head-on? Perhaps this is a problem of artistic interpretation– we’ll leave it up to the listener to decide.

The record also includes “DRUM SOLO,” an instrumental respite and a chance for the listener to focus on Hauptman’s drum skills (which are, indeed, pretty fire).

This album is far from a TOP Nachos debut, but it is their first full length album. All in all, it’s a cool new album from a prominent New Paltz band, definitely one worth checking out. The songs are campy and perfect for some basement headbanging.

“This is our first full-length album. We’ve only put out EPs before,” said Frank. “These songs definitely reflect our current sound a lot more. It’s just super fun music that reflects the current norms of our culture.”

Frank and Hauptman have collaborated on many projects before, perhaps most notably their house show venue Nacho House. For those who have never been to Nacho House, they are a house show venue in New Paltz that hosts a variety of different alternative rock and punk groups from New Paltz and the surrounding area, as well as bringing in touring bands. Frank has also recently performed as Winnebago Vacation.

TOP Nachos will hold their album release show for “Dank Side of the Moon” at Snugs Bar and Harbor on Sept. 29 at 9 p.m. Admission is $5 and the event is 21+.

The show will feature other local bands Shana Falana, Battle Ave and The Bobby Lees, as well as NYC group Stuyedeyed.

For more information, you can find TOP Nachos on Instagram @topnachos, and their music can be found on BandCamp at topnachosny.bandcamp.com. 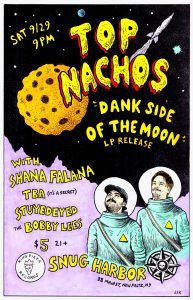