On Wednesday, Dec. 1, The Sexy Pitches will collaborate with fellow campus a cappella group Absolut A Cappella for their final performance of the semester, titled “Winter Wonderland.”

The event, which will feature a cappella performances from both organizations, is ugly sweater themed, with the Absolut Instagram page encouraging audience members to attend dressed for the occasion. The performance will happen at 7:30 p.m. in SUB 100N.

Winter Wonderland will be the conclusion of two successful in-person performances this semester from both a capella clubs. The previous shows co-ed club Absolut has hosted include humorous themes such as “Denim & Diamonds,” and “Your Cousin’s Eighth Grade Graduation.” The club hosted a voting session for this show’s theme, and the members settled on the Ugly Sweater theme.

“In order to prepare for this event, we have been rehearsing three times a week and working on strengthening our sound,” said second-year student and Assistant Music Director of Absolut John Alexander. “We rehearse our set that we voted on for our show and will often work on being a performer as well as a singer.”

According to Alexander, the group meets on Mondays, Wednesdays and Thursdays for rehearsals. They start their rehearsal times with a “story time,” where members can share whatever is on their minds. Then, the members start to warm up through improvisations that eventually form into full song practices. Any member is welcome to “play” by taking a chance on the solo.

“Once we feel we need it, we take a break that usually lasts longer than intended, but who could blame this extremely social group of singers?” Alexander said. “We love to get to know each other. Rehearsals are one big family reunion.”

The organization’s most recent past performance with The Sexy Pitches was “A Halloween Concert” in October, the two club’s first in-person performance together in over a year. Absolut held auditions for new members in September and welcomed nine additions to the group.

“I’m really just excited to be able to perform,” said first-year and new Absolut member Jeremy Sodergren. “Our group has a lot of new members, myself included, and we love to show off the work that we put in. I know for a fact that it’s so important for the older members of the group to be able to perform, especially with everything that’s happened with COVID-19. Getting back into performing is just very exciting, and this being our last performance of the semester it makes it that much more important to us.”

Even though this is the last performance from the group that will happen on the SUNY New Paltz campus, they still will be in action during the first week of December. Absolut will be traveling to Stony Brook University on Dec. 4 to join the school’s Pipettes for their Fall 2021 invitational, “A Roaring 20s Soirée.” Stony Brook’s other a cappella groups, the Vocalists and the High C’s, as well as Northeastern University’s Unisons will also be giving performances.

In March, Absolut participated in “Spring 2021 Acafest,” another event with a cappella groups from Rowan and Hofstra University. During the spring and fall 2020 semesters, the club hosted virtual open mics in collaboration with The Sexy Pitches and additional New Paltz a cappella group Male Call where members were still able to contribute to their passion by performing songs from home.

“​​I love to sing a cappella because of how much work goes into it,” said Alexander. “If something is not right, then the whole song sounds off. We have to go into the sheet music and figure it out, because there is no hiding behind instruments when the instruments are our voices. It helps you to feel even more connected to the music and to the energy you are trying to create.”

Several Absolut members that have been on the team since the spring, including Alexander, will be wrapping up their first semester with exclusively in-person performances after a year of virtual performances only. New members that just joined this fall, including Sodergren, will be finishing theirs with a ton of practice under their belts. A scroll through the Absolut Instagram account, @absolutacappella shows that they are passionate about their camaraderie, and spend a lot of time together.

“Singing in an a cappella group just gives me a way to connect with a group of people I’m close with,” said Sodergren. “It lets me express my emotions in a way that I’m not able to in any other fashion and it is just great to be able to do it with people who have the same mindset.” 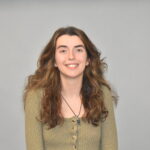 Allison (Alli) Dempsey is a third-year journalism major and communications minor. This is her second semester on the Oracle, and first as Arts Editor. Along with the newspaper, she is also a member of the WFNP Radio E-board staff and president of the New Paltz Music Collective.

Share on Facebook Share
Print Print
Share on TwitterTweet
About Alli Dempsey 23 Articles
Allison (Alli) Dempsey is a third-year journalism major and communications minor. This is her second semester on the Oracle, and first as Arts Editor. Along with the newspaper, she is also a member of the WFNP Radio E-board staff and president of the New Paltz Music Collective.