How you market an event has everything to do with its success. After another unsatisfying meal on campus Saturday night, I began wondering how I was going to occupy the next two or so hours before it was socially acceptable to go to bed—that’s when a bright poster, a rainbow design with bold, black letters, caught my eye.

The poster, which was promoting “The Most Fabulous Story Ever Told,” the most recent performance as a part of the Praxis Series, had everything a poster for a play would typically contain: title, director, dates, times and one all-important detail: “free admission.”

So that’s the story of how I found myself comfortably situated in the upper-most row of the left section of Parker Theater last Saturday. Though I don’t have enough confidence to call myself a thespian, I’ve always been a fan of any theatrical production—especially those that come at no cost. “Worst case scenario, it sucks,” I thought to myself. “And I’ll leave.”

Spoiler alert: I did not leave.

It is not often that you experience a student-directed and acted performance that is executed well enough to be considered outstanding, but “The Most Fabulous Story Ever Told” is certainly one of those lucky few.

Written by Paul Rudnick, the show recounts the story of the old testament of the Bible with one earth-shattering twist; what if it actually was Adam and Steve.

“The Most Fabulous Story” began with lighting cues from the stage manager (Clarissa Mota), who had been on stage from the moment audience members began filing in. Right away, this character was established as a God-figure, as she began cueing the “creation” of the earth (“first sunset” saw the lights transition from a soft yellow to a cool blue, “oceans” prompted two stagehands to wave a blue sheet across the set and so on).

This led to the creation of the first man, Adam (Dennis Wakeman), who, minutes into his arrival, proudly proclaimed “I’m gay!” When Adam’s eventual partner-in-crime (whom he later refers to as “the first boyfriend”) Steve (Dakota Rose) arrives, the two click, despite being starkly contrasted beings. Wakeman and Rose did a tremendous job presenting this juxtaposition right off the bat. While Steve remained cool and collected, Adam showered him in unanswerable questions, including but not limited to: “Where am I? Who am I? What am I?”

After Adam was tempted by several actors disguised as audience members (one of my worst nightmares, but thankfully I was seated in a safe-zone far away from all attention), we were introduced to two new characters: a lesbian couple named Jane (Caroline Casparian) and Mabel (Livia Simmons). Like Wakeman and Rose, the chemistry between Casparian and Simmons was clear from the start. Though the two characters were polar opposites, the actors did an amazing job of making you believe that they belonged together.

The cast, which was made up of only nine actors, worked together perfectly. Each actor had their standout moments. Lauren Hess, Kacie Boice and Andrew Perillo shined in the second act, while Joshua Joyner was a scene-stealer as the “Immortal Boy-King of Egypt” towards the latter half of the first act.

Though humorous throughout, the second act, which took place in 1980s Manhattan, was full of hilarious one-liners. “I teach first grade on the Upper West Side,” one character exclaimed. “When one kid hits another, we call him depressed.”

On the surface, “The Most Fabulous Story” is a phenomenally written play that was executed perfectly this past weekend. Delving deeper, questions may arise: was the stage manager really God? How did the two acts, which saw the same characters in two completely different millenniums, relate?

Much like the questions posed by Adam in the play, no one has the answers—but that may be the beauty of it. 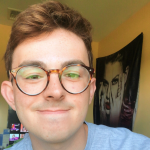 Jake Mauriello is a fourth-year journalism and public relations major, with a minor in film and video studies. This is his seventh semester with The Oracle. Previously, he has worked as an Arts and Entertainment Copy Editor, Features Editor and Managing Editor. He dedicates each of his stories to his personal heroes, Taylor Swift and Alexis Rose.

Share on Facebook Share
Print Print
Share on TwitterTweet
About Jake Mauriello 100 Articles
Jake Mauriello is a fourth-year journalism and public relations major, with a minor in film and video studies. This is his seventh semester with The Oracle. Previously, he has worked as an Arts and Entertainment Copy Editor, Features Editor and Managing Editor. He dedicates each of his stories to his personal heroes, Taylor Swift and Alexis Rose.