The fact that I’m not in jail at this moment is a result of privilege — I say this as a completely law-abiding citizen. As a Black woman and someone who was raised with Black brothers, I’ve always understood that when you’re Black, innocence is not enough.

My story with a police department in New Paltz is a testament of this.

I work at a daycare center in New Paltz. One day while I was at work, a white parent came to the center and explained that his daughter couldn’t find her laptop. We both looked around for it and couldn’t find it. I didn’t think much about it because the child had misplaced her laptop a few times before — as is characteristic of children.

But within 24 hours, an officer from a local police department in New Paltz was at my job questioning me and strongly implying that I had stolen it. He made it clear that this would be the beginning of a very long investigation that could end in jail time.

Whenever I tell this story, I think it’s important to insert a quick reminder here. In America, if you are faced with the grim, world-stopping reality of needing to call 911 to report that your child has gone missing, an operator will answer your call and tell you that you: “You need to wait at least 24 hours before we can help.” But somehow, a young child with powerful parents misplaces an object and officers are on the scene investigating before it’s even been a full day.

The investigation was widely uncalled for. There was absolutely no evidence or logic suggesting that I, or anyone, had stolen it. Common sense would suggest it was misplaced.

But as soon as we found out there would be a police investigation for this missing computer, a leader at my job compiled a list of several names and contacts of all the people who were at the center when the laptop went missing and shared it with the officer who was investigating.

The officer almost immediately disregarded the list. Out of the roughly 20 people who were there, he happened to narrow his investigation to focus on the only two Black women. He even tried to interview a Latinx staff member even after multiple people explained she was not even at work the day it was lost.

For the next several weeks, my coworker and I (and another who will remain completely anonymous) were harassed repeatedly.

The officer came to question me at my job multiple times. Police cars were placed in front of my workplace. The officer interrogated and belittled us repeatedly. Search warrants for our homes were threatened. Polygraph tests were suggested. Reminders that we would be given jail time if found guilty or if we didn’t confess soon were loomed over our heads repeatedly.

The third time I talked to the police officer he told me that if found guilty I would be given a grand larceny charge, which is up to ten years in prison. At first I was annoyed, but not worried because I wanted to think that since I had not stolen it, that had nothing to do with me.

Still, stories of falsely accused and then imprisoned people swirled through my head and I was plagued with anxiety. Well-known stories of failings of the criminal justice system plus the experiences of those closest to me meant I didn’t have the luxury to trust the system.

I ended up getting a free lawyer and contacting a few close family friends who have extensive understanding of the law. New Paltz students have the benefit of having access to a free lawyer but there are also tons and tons of resources online that can help you connect with a free lawyer. Each person explained to me that this was discrimination and harassment.

They also explained to me that I could say, “Am I under arrest?” and when the answer was no, I could say, “I will no longer be answering any questions without a lawyer present.”

Everyone should know this. Countless people have been tricked into jumbling their words or making themselves seem guilty all while in a situation they weren’t even legally required to engage in.

The officer may make it seem like it isn’t a big deal to just answer those questions, but it is. They are trained in manipulating certain answers. Even if you are innocent, you are under risk of saying something that may make it seem like they have probable cause to arrest you, or prolonging an unnecessary investigation.

You are not doing yourself a favor by talking to police without a lawyer.

A few months ago I told the officer that I had a lawyer and would not speak to him further. I haven’t heard from him since.

My somewhat happy ending is a result of luck and privilege.

Part of this is that I was able to follow a very confusing and manipulative line of questioning while remaining calm (which is important because anger and confusion are quickly associated with guilt during interrogations) and not falling for any of the tricks.

Often, people with mental disabilities are unable to do this. When people can serve time for simply tripping over their words as a result of their mental ability, there’s a flaw in the system.

Our criminal justice system serves the most privileged at the cost of wrongfully locking up people who are innocent.

1 in 25 people sentenced to death in America are innocent, according to a research study conducted by Proceedings by the National Academy of Sciences of the United States of America. That’s only the number of innocent people on death row that we know of. Plus, this statistic also doesn’t include when police officers sentence innocent people to death without even a chance at due process. Rest in peace Elijah McClain.

Of the people who are released when they are found to be innocent, the average time they serve before being released is nine years. Nine years of liberty denied. Nine years of conditions that the United States’ very own Constitution describes as a form of slavery.

That could be nine years of prison rapes and mystery meat and gang fights and showering in front of 30 other people. Those could potentially be the last nine years being the last years of your life because you can no longer live with what you endured. Rest in peace Kalief Browder.

How many times will a Black person be sentenced to questioning, harassment, jail sentences, capital punishments for a crime they did not commit? How many times will we be treated like we are guilty simply for existing? When will the rest of America realize that this is the real crime?

Readers, when you look at the systems of America, I hope you see the slavery. Not because it was yesterday, but because it is today. Because until criminal justice centers justice, America itself is the one committing the crime. 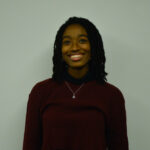 Amayah Spence is a fourth-year psychology major, minoring in journalism and serving as editor-in-chief of the Oracle. She believes journalism should lend a microphone to those whose voices are not typically amplified without one, and that is the goal she consistently pursues as a journalist. Previously, she wrote for the River, the Daily Free Press and the Rockland County Times.

Share on Facebook Share
Print Print
Share on TwitterTweet
About Amayah Spence 50 Articles
Amayah Spence is a fourth-year psychology major, minoring in journalism and serving as editor-in-chief of the Oracle. She believes journalism should lend a microphone to those whose voices are not typically amplified without one, and that is the goal she consistently pursues as a journalist. Previously, she wrote for the River, the Daily Free Press and the Rockland County Times.